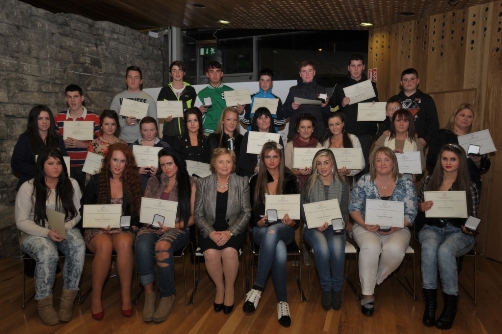 The Exchange National Educational Achievement Awards 2012 were presented by Minister for Children and Youth Affairs, Ms. Frances Fitzgerald TD, on the evening of Friday, November 2nd 2012, in the Dublin City Council Building in the Wood Quay Venue.

Minister Fitzgerald also presented the raffle prizes which included, an iPad, a laptop, cameras and MP3 players following the presentation of the awards.

The recipients are an inspiration to those who are preparing for exams or who are thinking of returning to education. The event highlights some of the positive things happening in the Traveller community.

This was the fifth annual award ceremony, honouring Travellers from across Ireland, who have completed formal education. Since the inaugural ceremony in 2009, Exchange House has presented over 350 learners with the National Educational Achievement Award.

EU Project - My Community 2020 - Still working away in the background »

Update for all Learners at Exchange House Ireland »

New Phone Counselling Service for Travellers during the Coronavirus Crisis »